A few years ago, browsing the notices of the AMS, I found <a href=”http://www.ams.org/notices/200701/fea-ghrist.pdf“> an article by R. Ghrist and V. de Silva</a> about topological algebra used for detecting coverage problem. Barely stated, the difficulty is as follows: Consider a set of sensors, each of which detecting intrusion in a region around itself; how can we be sure that no James Bond can enter the full domain without being detected ? Consider the following situation where monitored regions are the circles (the colors have no meaning, they are just here to put a touch of psychedelicism). 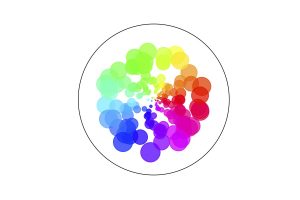 Apart from “looking at the picture” and pinpointing the coverage “holes”, it seems rather mysterious that some mathematical theory can help, but it is the case and this is called topological algebra! The basics are very well explained is the above mentioned paper. Roughly speaking, it consists in constructing a combinatorial object (the Cech complex) from the geometry, adding an algebraic structure on it, making some simple computations and then interpreting them geometrically. One of the conclusions we can draw is whether or not, the domain is fully covered. At a most basic level, it can also says if the network of sensors is connected, i.e. if a message can go through one sensor to any other though the network. This is of critical importance, since sensors are small and cheap devices, aiming to work autonomously without the help of an impotent central server, and thus should be able to communicate with their siblings at any time.

That’s where the adventure began: That’s how with my colleague P. Martins, we began to investigate how such tools could be applied to wireless systems in general and not only to sensor networks…